Home sickness hits sometimes and for that I have food to make me feel all better. And if it’s not home sickness I’ll just find another reason to make this pie because I love it. And it gets so much extra points for making all the house smell like baked apples.

I guess you know by now that I live in Istanbul, Turkey, but I’m not from here. I’m Portuguese (I don’t know if I mentioned that before, did I?), and sometimes I feel like bringing my old recipes back to my home here. I guess I should have named this post the Portuguese Side – Part 1, since I guess I’ll make other posts with other recipes from my home country, but whatever, I’ll deal with that later. Portuguese recipes have the extra bonus of being fairly simple and quite cheap, because the ingredients are usually simple too. And this last point obviously fits my needs, as in, it doesn’t really hurt my budget(like my Mad side post did *snif*).

Anyway this pie is done in basically 3 parts: 1) making the pie base (which u can buy already made if you don’t feel like dealing with the dough) , 2) making the custard (for me it’s called confectioner’s cream but that’s a direct translation, and I guess they’re the same) 3) cutting the apples. It takes around 1 hour to put together, and 40 min in the oven, but that hour is if  you make the dough and let it rest, if not it takes around 30 minutes. Pretty fast right?

So here’s what. you need: 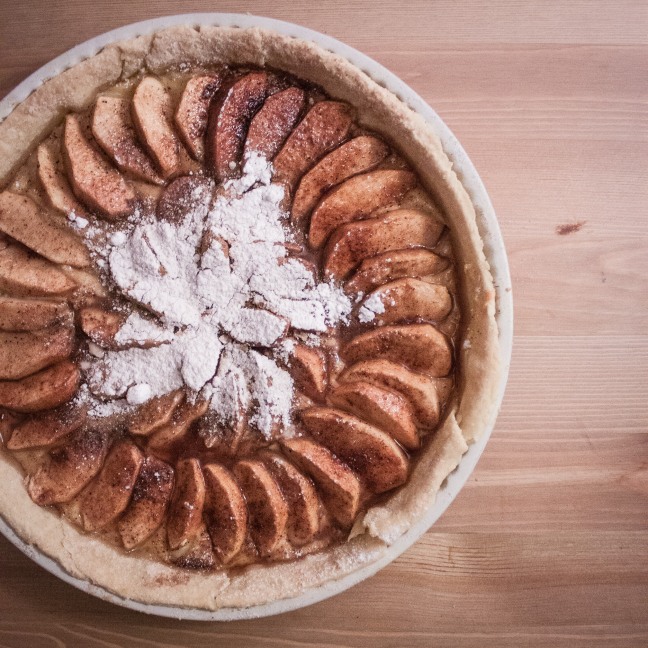 Here’s how you do it:

1) Pie base: In a bowl join the flour, the salt and the butter. With the tip of your fingers join the butter with the flour, until you get yellow sand. In a separate bowl (or glass) beat the egg with the water, and join them to the flour and butter mix. Fold it until it’s an homogeneous paste, this wont take long and you don’t want to over mix it. Wrap it in plastic wrap and put it in the fridge for around 30 minutes.

2) Custard: Put 200 ml of milk on a small pan and bring it to a boil. In another small bowl put the resting 50 ml of milk, and flour, sugar, egg and yolks. Beat it all until there are no lumps. By the time the milk is boiling, take from the heat and join in your mix. Beat well until it’s all more liquid. Bring back to the heat and mix until it gets thicker. Be careful to keep mixing and don’t take your eyes from it, since it burns easily and if you don’t mix well it will be all lumpy. Just take it off the heat when it gets to a creamy consistence, thick enough to pipe it if you want.

3) Assembling: Pre- heat the oven to 200 C. Cut your apples into fine slices. A quarter of an apple gives around 4 slices, so they don’t need to be all that thin. Take the pie base from the fridge and roll it down into a circle enough to cover your pie form and a little more. The dough shouldn’t be that thin because it’s not gonna grow that much in the oven. Butter your pie form before you put your pie base dough on it. Cut off the extra dough that comes out of the form. Now on top goes the custard, use the back of your spoon or a spatula to spread it evenly on your dough. The apple slices go on top, circuling them around the form, until all the custard is covered. On top put some cinnamon and sprinkle all with a genours dose of powder sugar. Bake in the oven for around 30-40 minutes. If the apples aren’t soft after this time, leave if for 10 more minutes. Just be careful not to burn them. Sprinkle some more cinnamon and serve.

It seams like a lot, but really it’s so easy and it’s tastes divine. This recipe serves around 8 people, or actually 8 slices, people don’t have to eat just one do they?

Try it and prepare yourself to not have any pie left for the next day if you are more than 2 eating. That’s no problem anyway, because since it has fresh fruit it’s not very good to keep more than 1 day waiting.

This time around I had some friends over dinner and 5 people ate all of it, and they weren’t all that hungry 🙂 I always go back to this recipe, as you can see it’s quite healthier than my usual choices, but it tastes as good as any other.

Food on the Side is officially open for business and accepting orders for pastries and desserts. So if you are in Istanbul and have a meeting that requires a cake, or a party that requires something fun to eat, contact me by email at mafaldacooks@gmail.com.

5 thoughts on “The Portuguese Side”

This site uses Akismet to reduce spam. Learn how your comment data is processed.